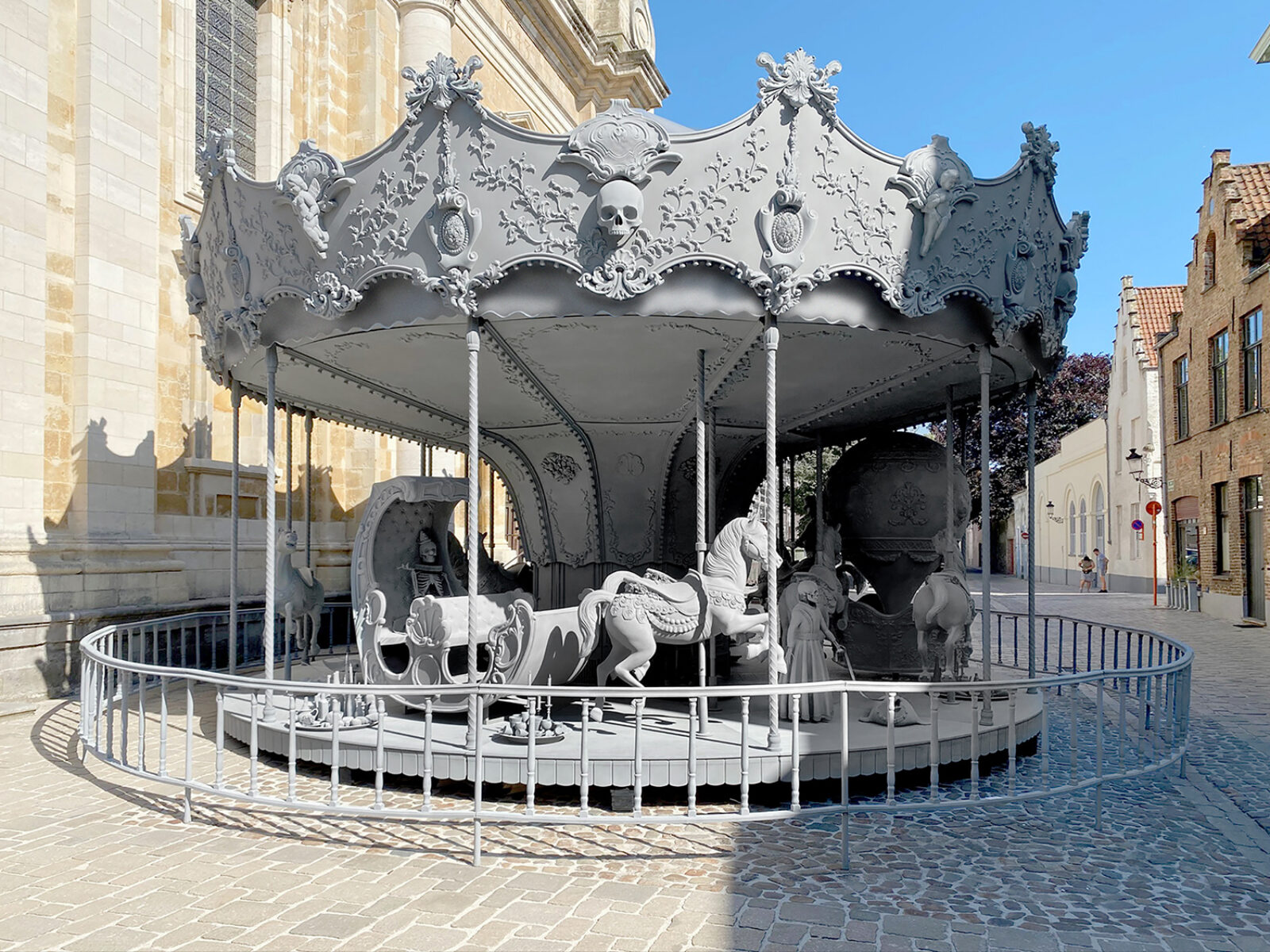 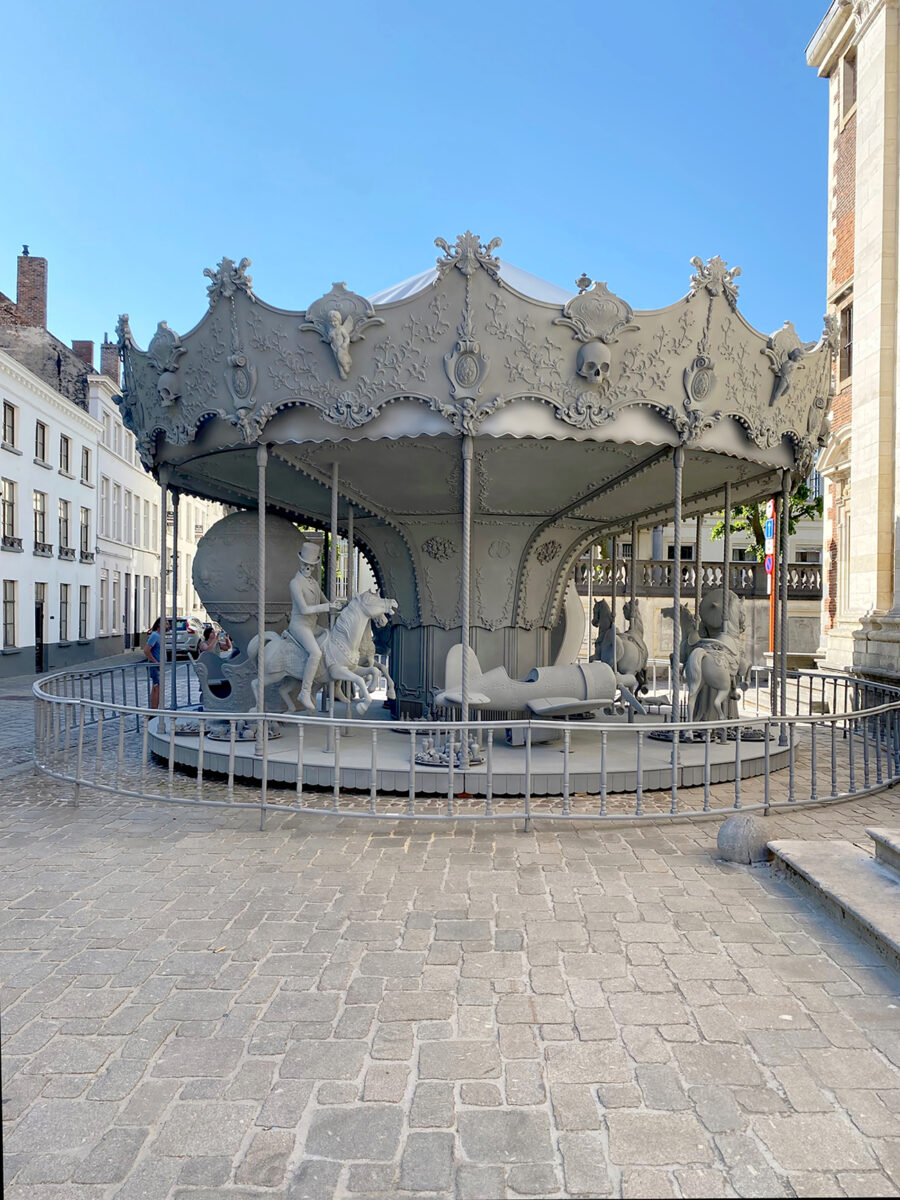 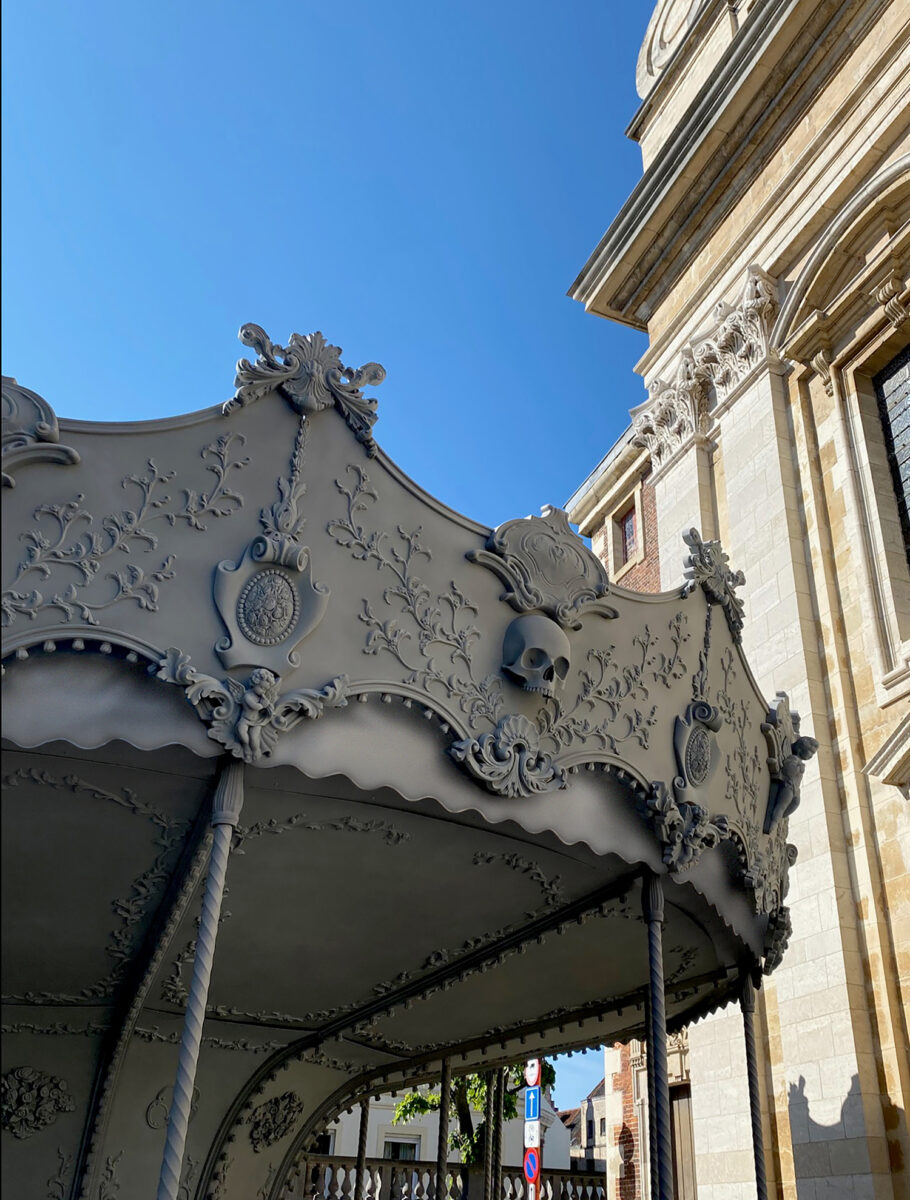 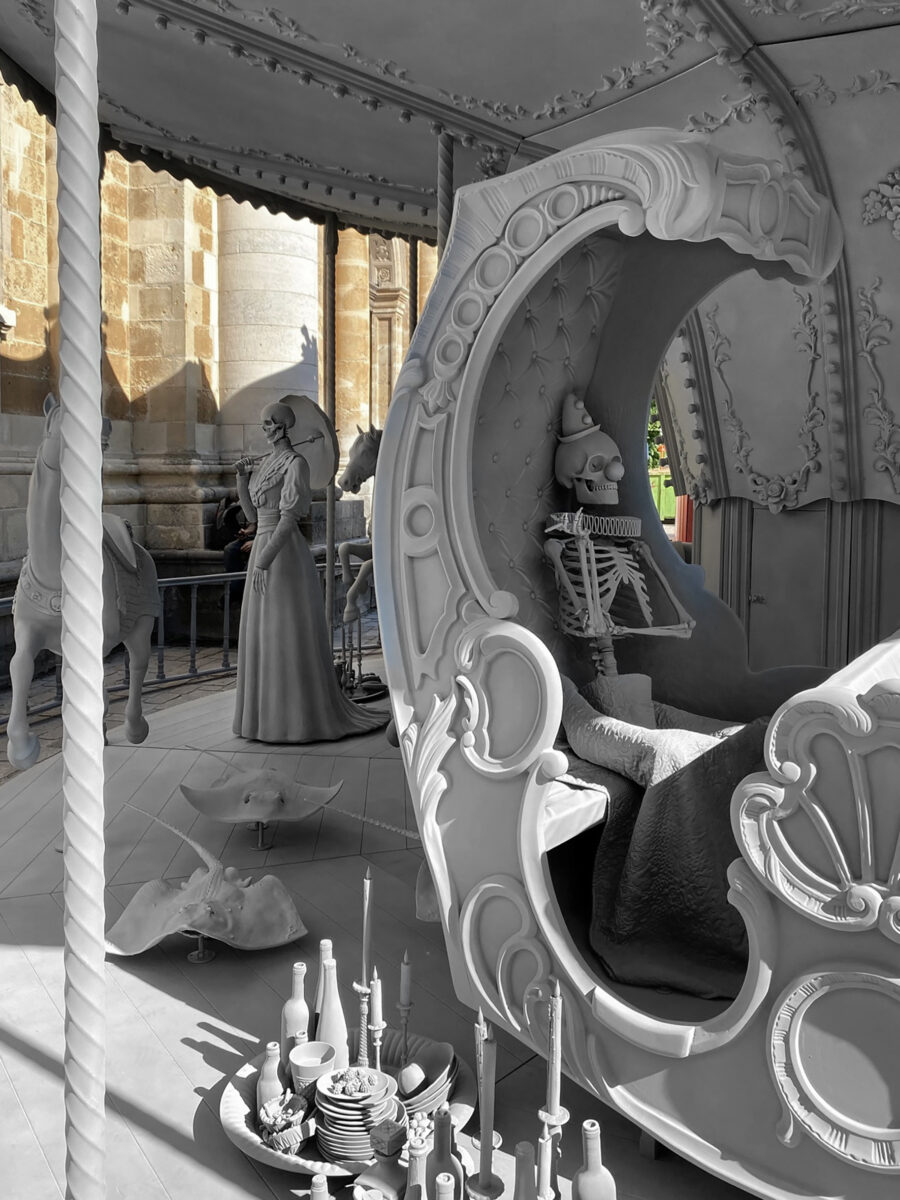 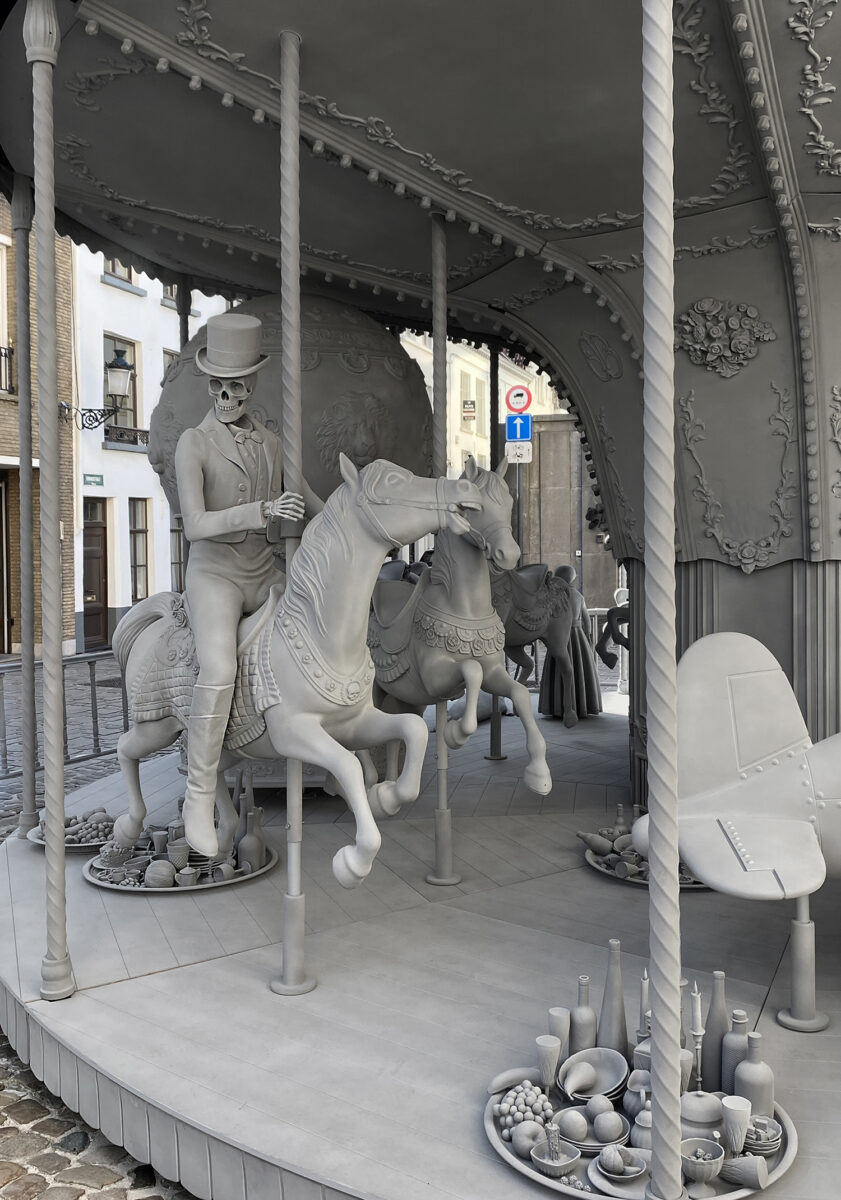 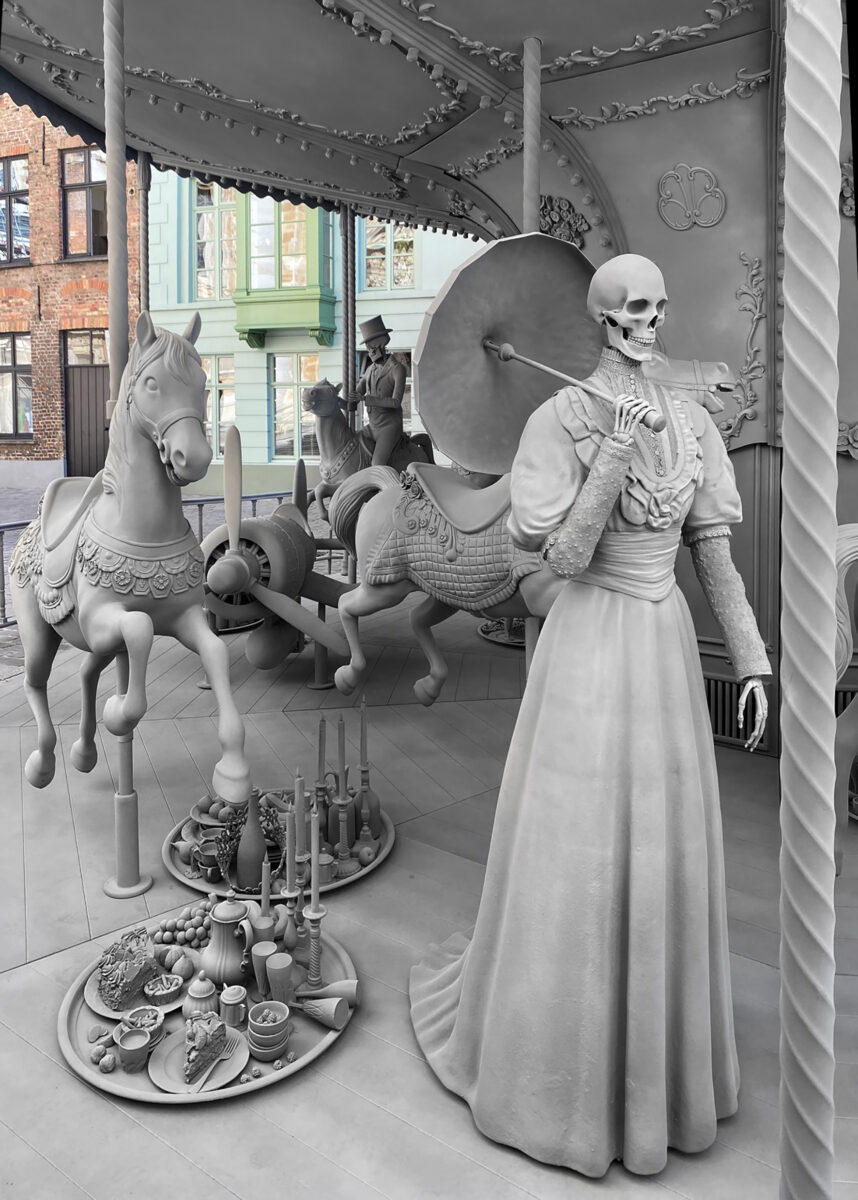 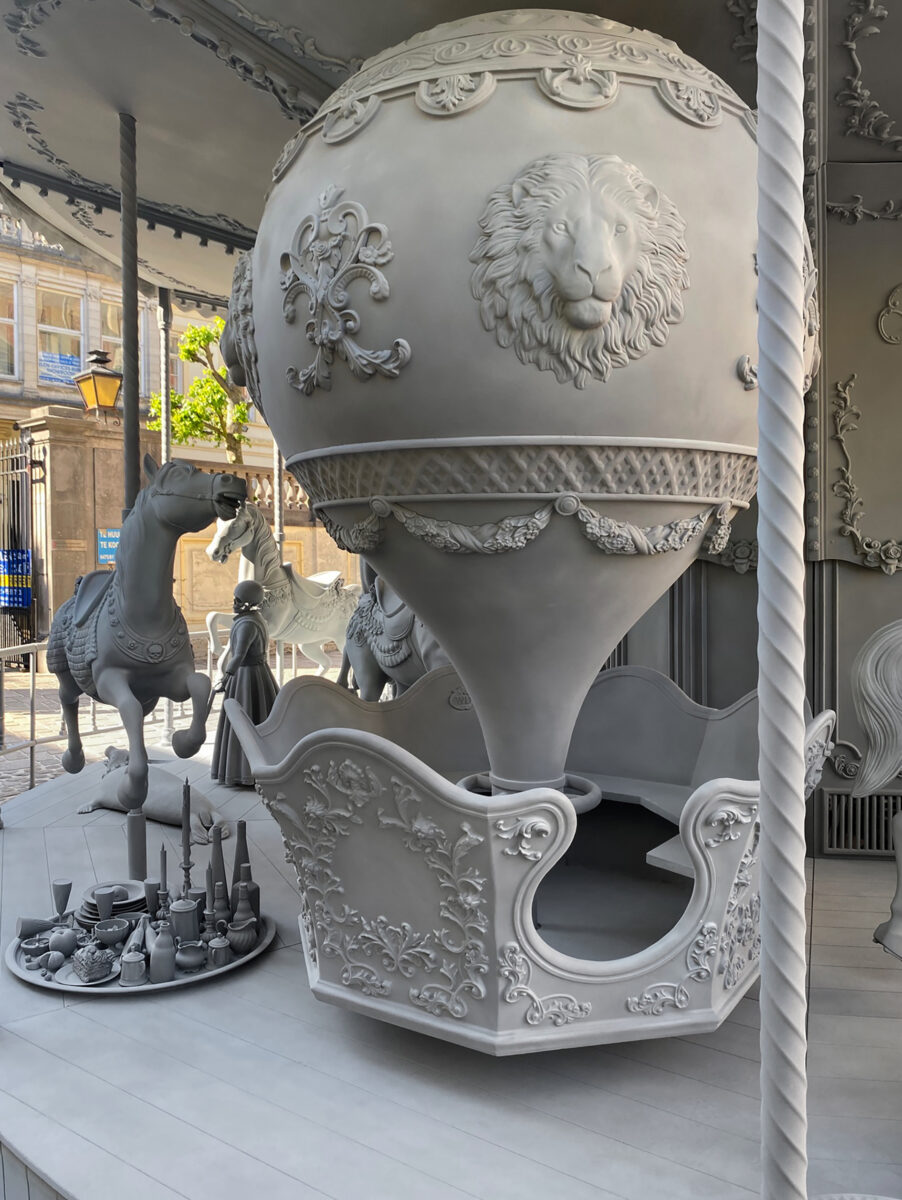 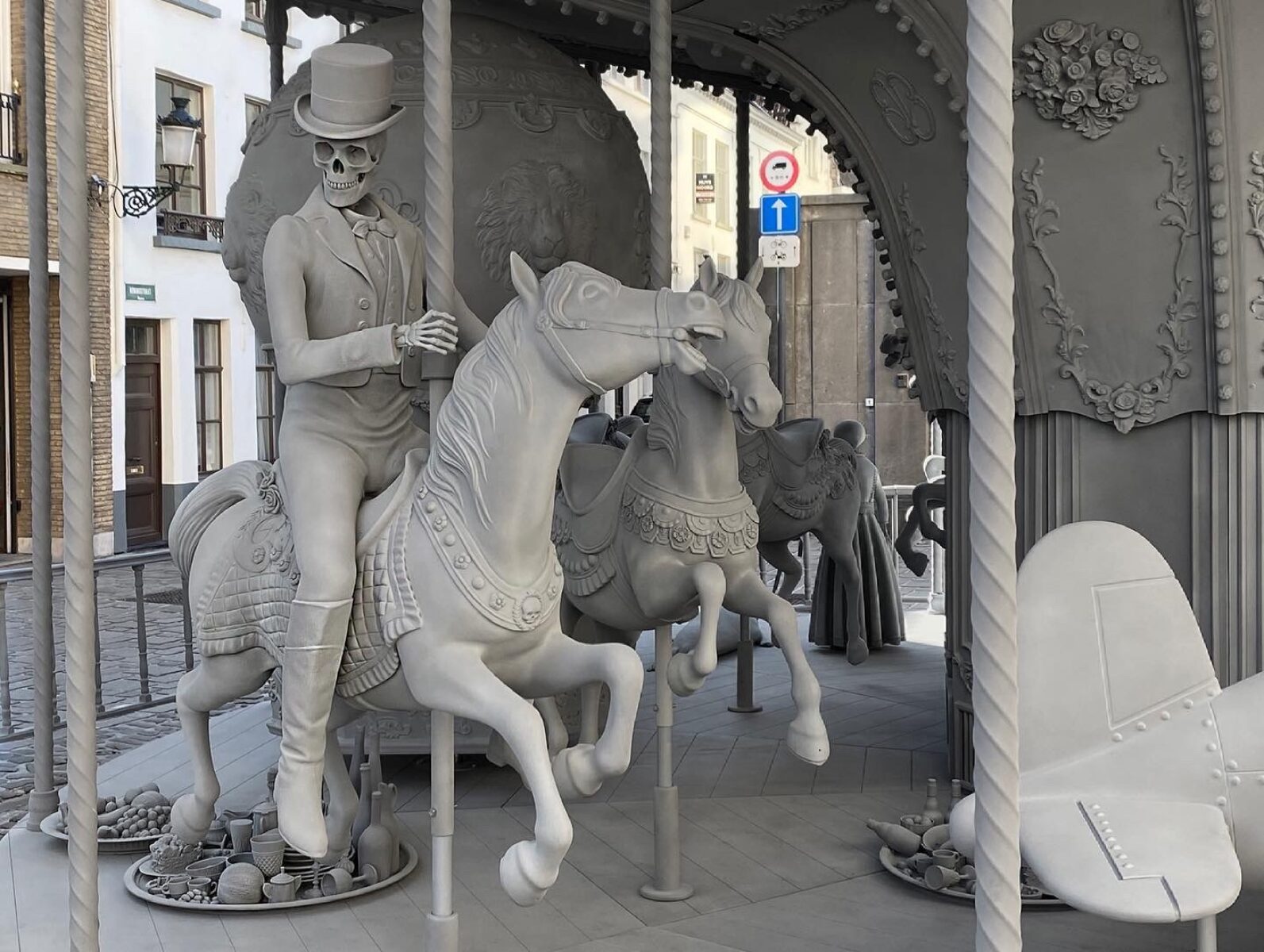 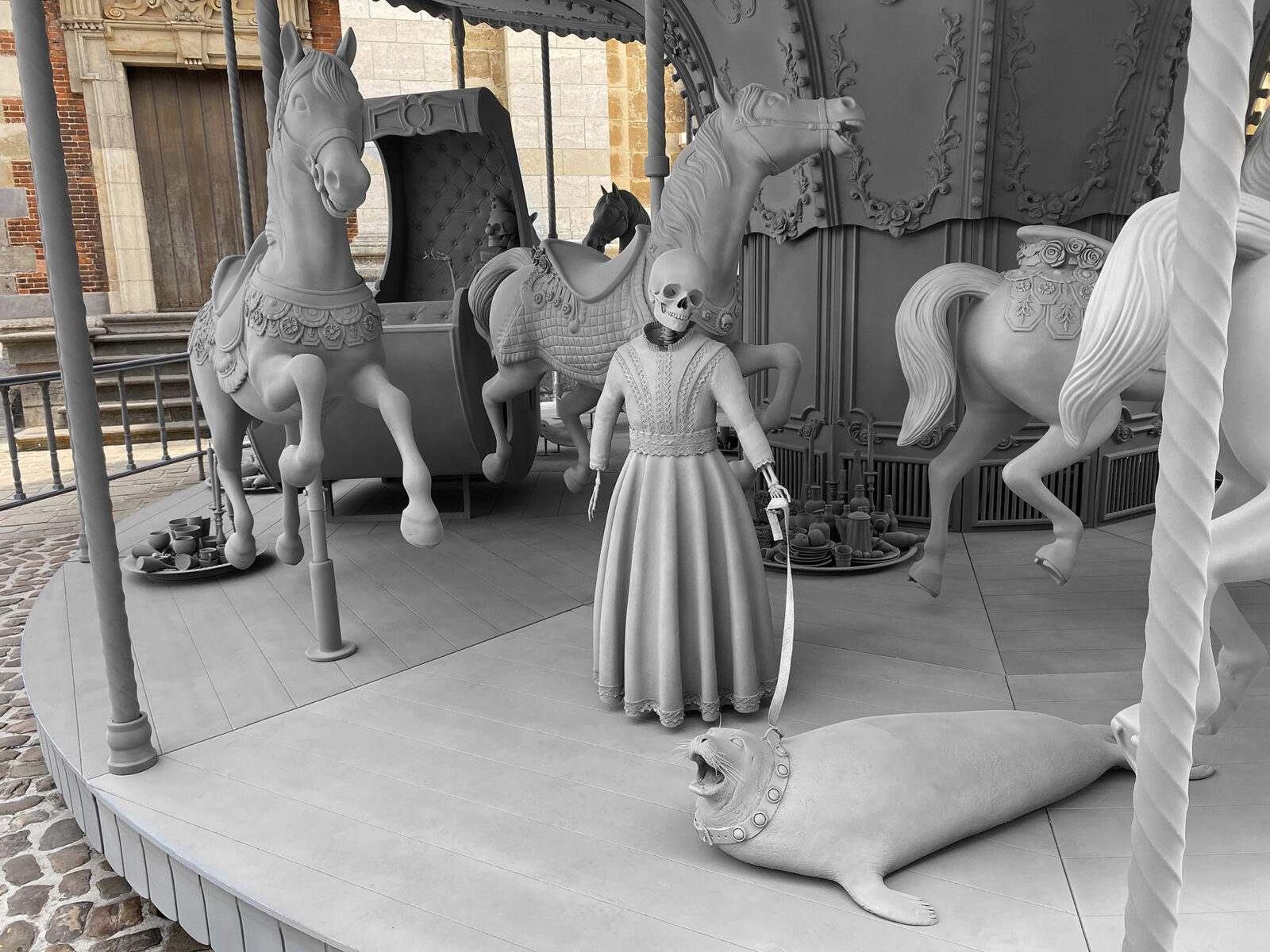 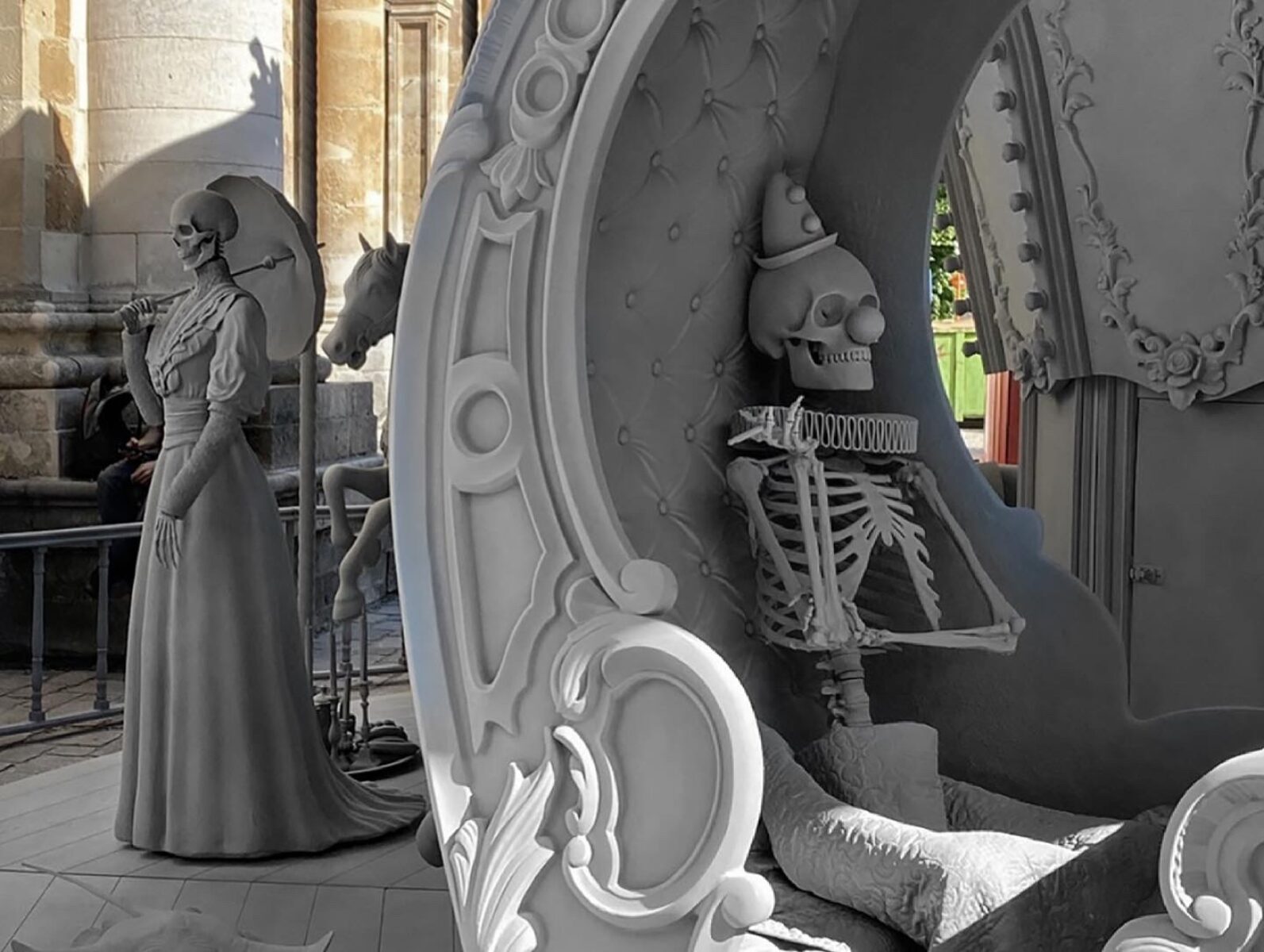 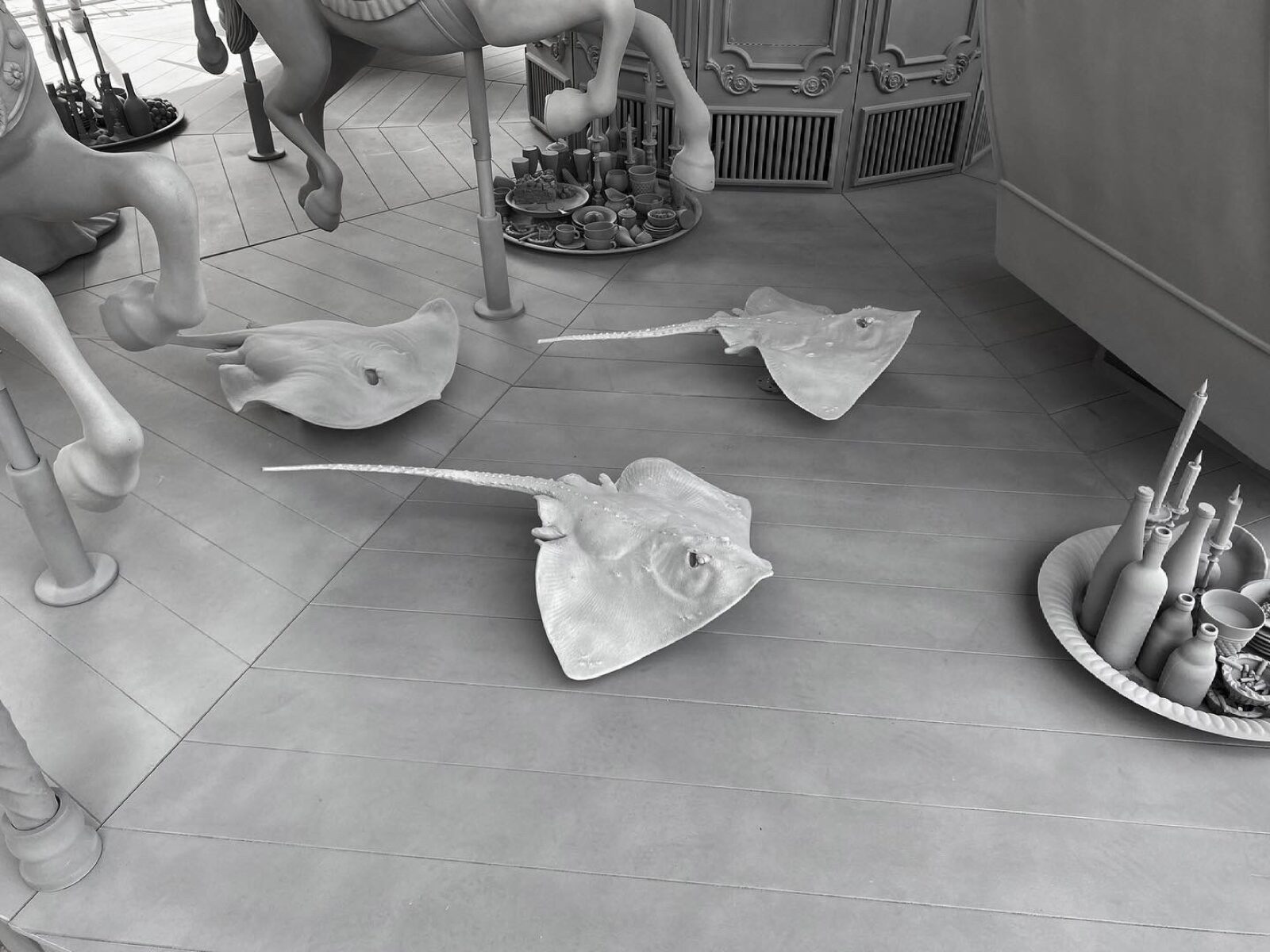 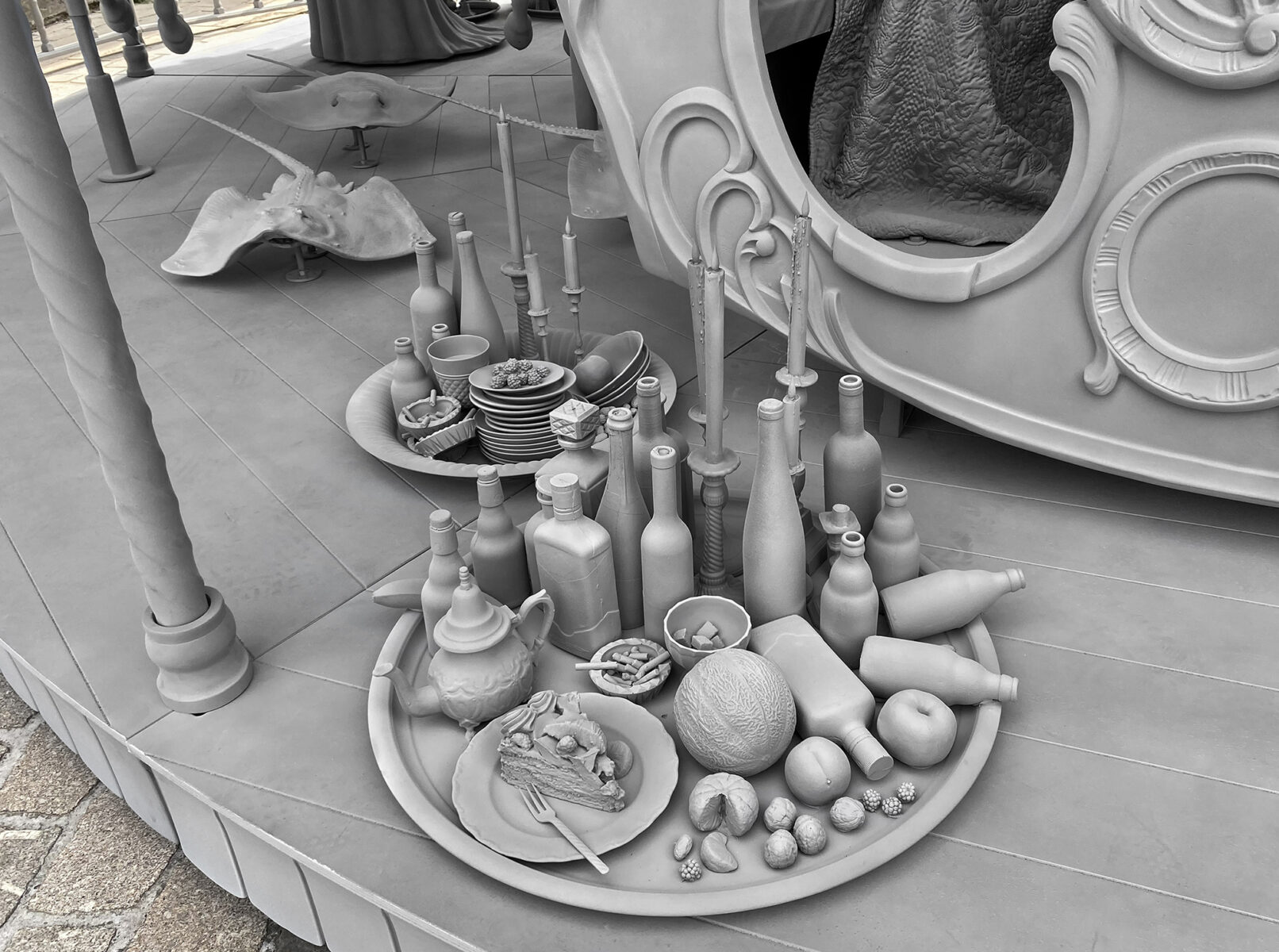 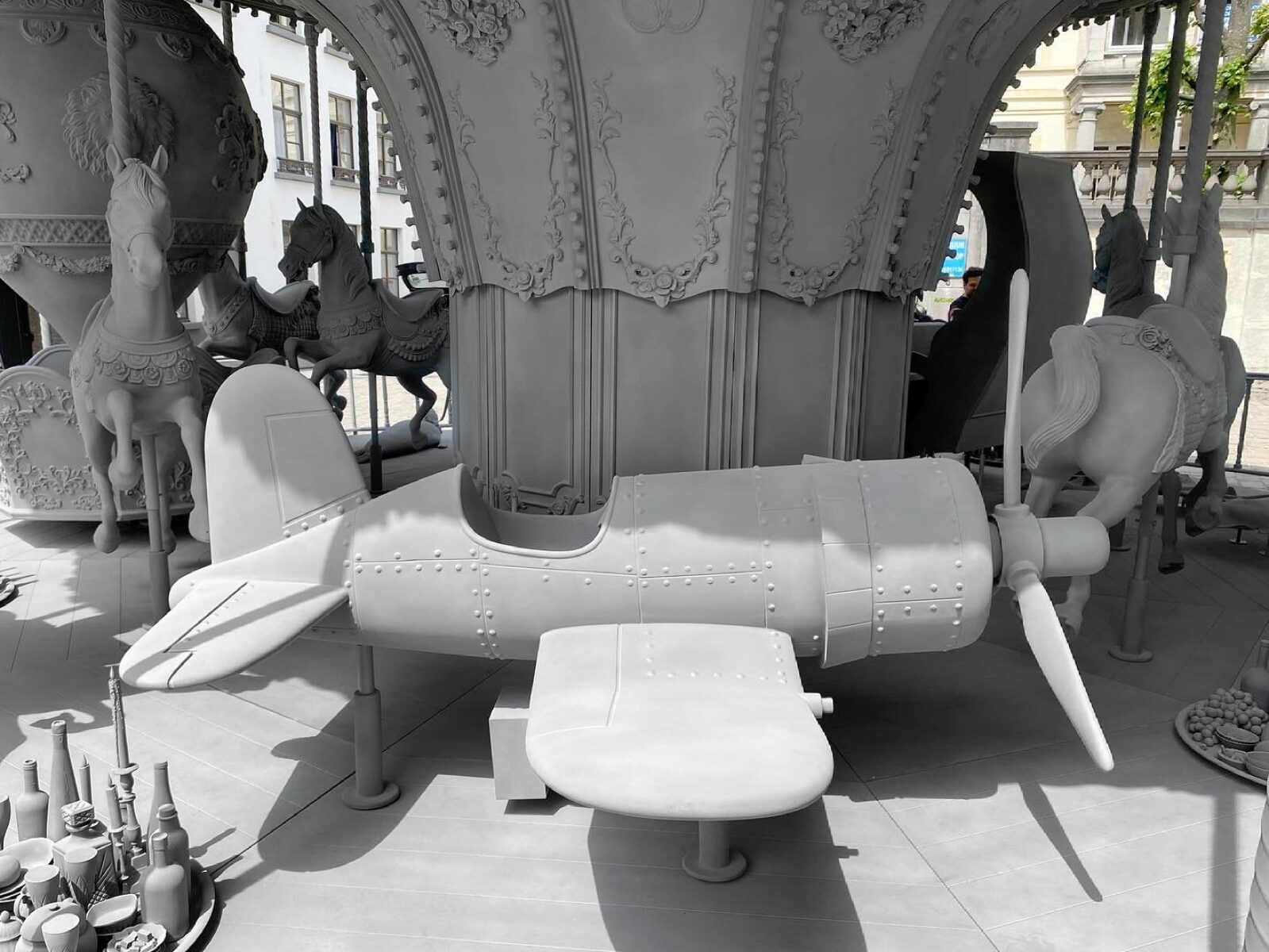 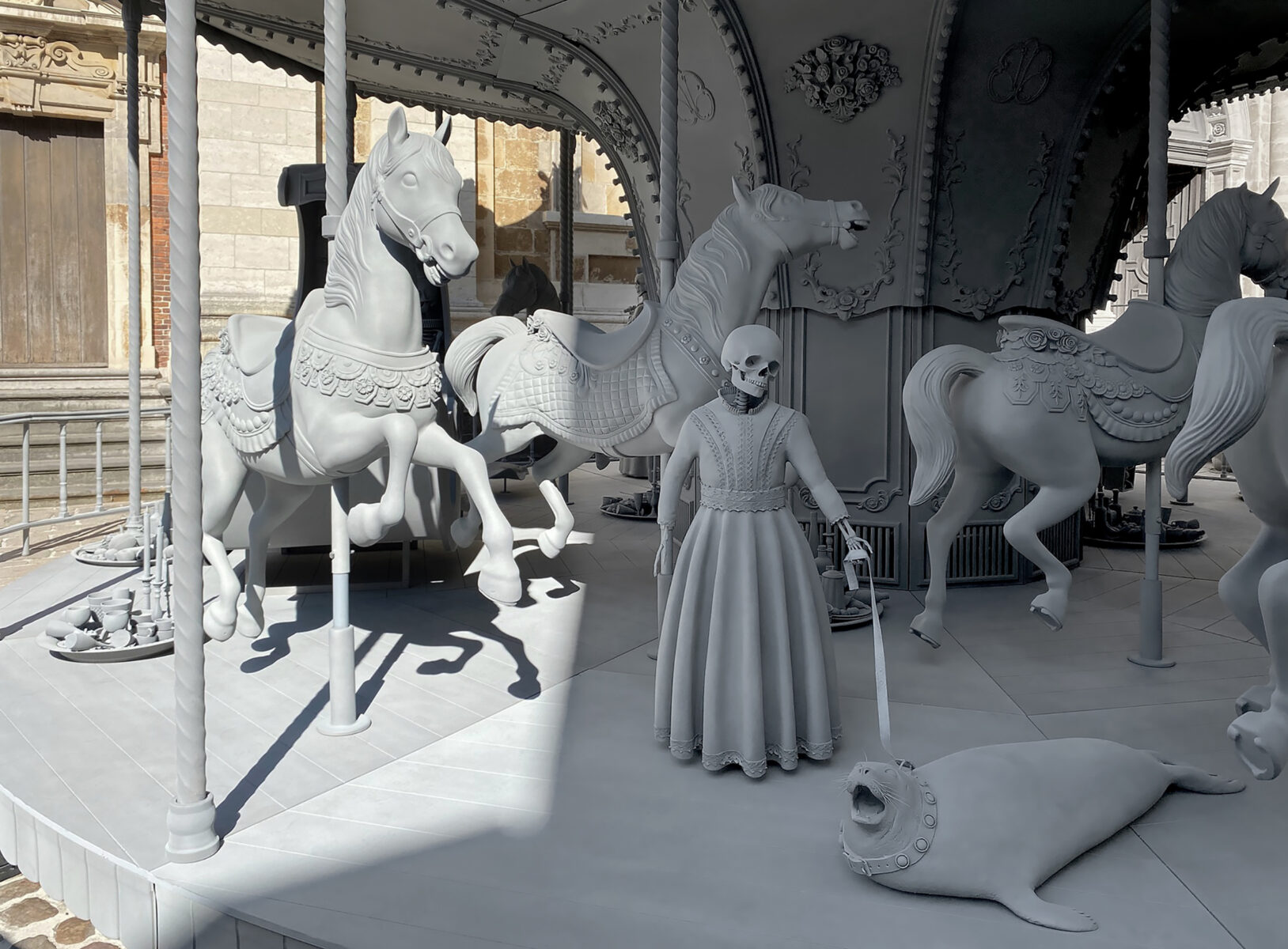 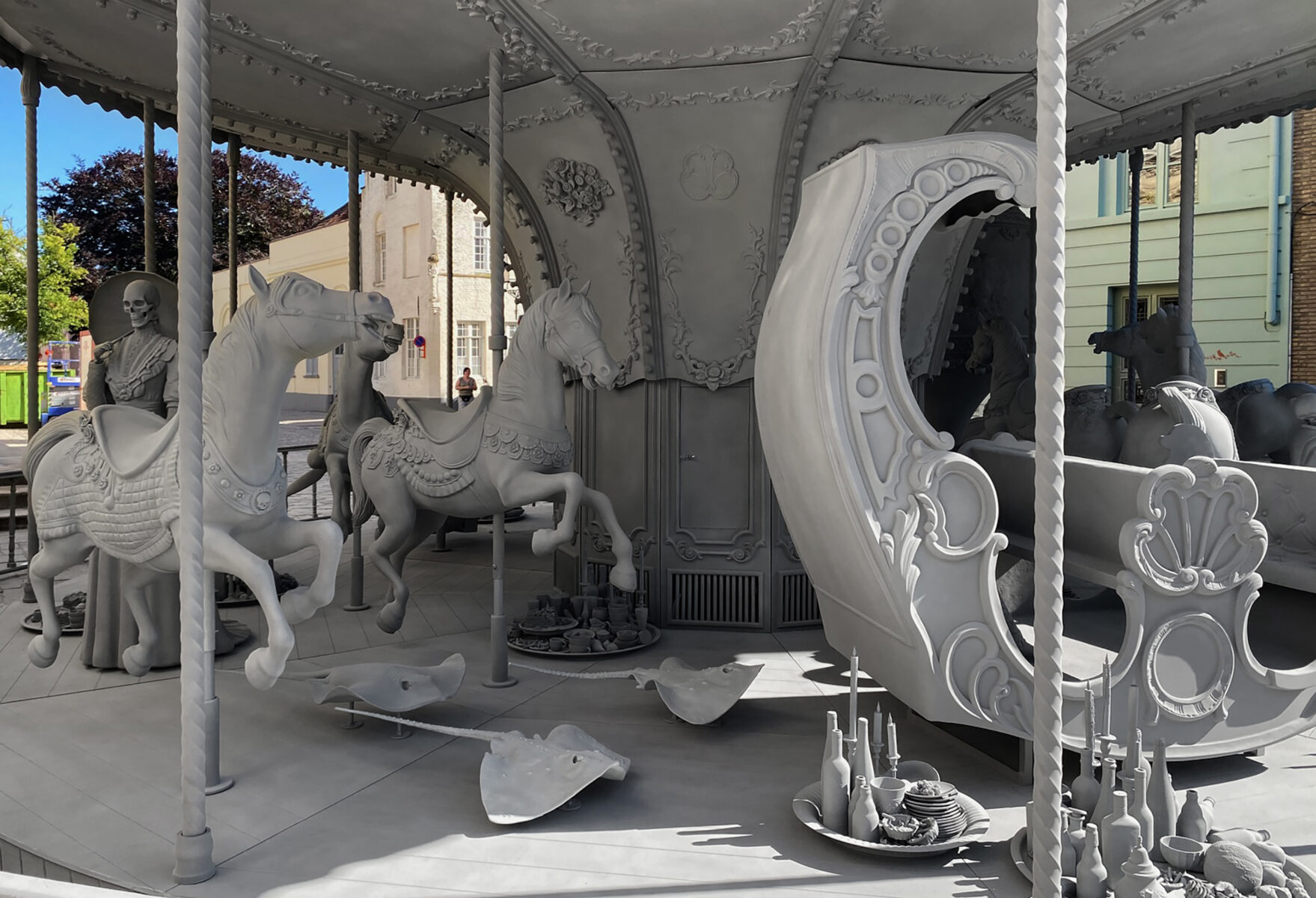 'Danse Macabre' is a life-size, monochrome grey sculpture of a carousel. The 'classic' carousel as we still know it today in many variations, is usually a baroque, brightly coloured, sparkling kitsch object that refers nostalgically to the times of yesteryear, when the attraction had little competition with all the current fairground commotion.

In 1999, at the very beginning of Hans Op de Beeck's career, he realised the video work 'Blender', in which a pompous colourful carousel begins to spin slowly and then magically dissolves into an unreadable candy floss whirling movement, and then returns to stillness. The carousel has since then become a sporadically recurring subject in his work.

Op de Beeck considers the merry-go-round as a typically human, somewhat tragicomic staging of entertainment. It is also a rather absurd object: we lift our children and place them on wooden horses and then let them spin aimlessly in circles.

Such amusement objects or constructions that are not or no longer in use take on a melancholic quality. Silenced or bygone cheerfulness gives those objects, which are primarily made to be in motion and crowded with people, a sombreness, like the emptiness after a party.

The grey monochrome of 'Danse Macabre' gives the carousel a completely petrified, inert appearance, as if it were a fossil, frozen in time. By removing all the colour, the carousel is stripped of the last layer of vibrancy, moving it further away from the actual object. This work is a sculptural interpretation, not an imitation. The matt, grey colour subdues the image, like an ash-covered remnant object after a major fire.

The title 'Danse Macabre' alludes to the halted procession of carriages, horses and objects that refer to death, which Op de Beeck designed as a kind of oversized still life. The still life as a historical genre has the tradition of being a 'memento mori'; a reminder of the ephemerality and relativity of our lives.

In The Boatman and Other Stories, Belgian artist Hans Op de Beeck reflects on the fleeting stages of life through an evocative series of vignettes in uniform …

The artist talks about art-making as catharsis and why, for him, it is all about the creation of visual fiction. Hans Op de Beeck (b1969, Turnhout, Belgium) is …